World War Z and the Definition of War

Zombies are all the rave and no one knows the zombie apocalypse better than Max Brooks, lecturer on zombie apocalypse survival skills and author of the best-selling books The Zombie Survival Guide and World War Z. An Oral History of the Zombie War.

World War Z is a compelling read, inspired by the journalism of Studs Terkel. But there is something that bothers me with this book and that is how the story brings the zombie apocalypse to an end. The brave, new post-apocalyptic existence is difficult to believe in because the solution to end the war is not plausible.

As an historian I study what it is that makes us human. One of the things that separates human beings from other living creatures is that we wage war against one another. In other words, a big part of an historian’s job is to study warfare.

World War Z chronicles the world war against a zombie infestation through survivor testimonials. We follow the spread of the global epidemic from its outbreak until its fragile containment through stories told by all kinds of people, from the teenager who watched her parents’ reaction to the outbreak to the government representative who was given the task of finding a solution to an insoluble situation.

To understand the problem we must first look at what war actually is. On the surface level “war” is two entities fighting each other with lethal means by using specialized groups. In other words, war is soldiers, guns and ammo. 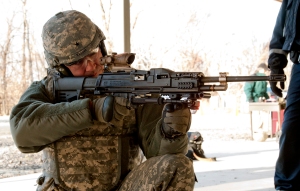 But for there to be soldiers, guns and ammo, there needs to be a society whose sole purpose is to support the ongoing war. That is to say, a society’s entire economic and political structure needs to be geared towards war. Industrial production, food distribution, financial investments and recruitment of the work force need to be adjusted to provide a steady supply of soldiers, guns and ammo until the conflict ends. This is why we talk of a society being in a “state of war”.

The turning point of the zombie war in North America comes when the government decides to change its war tactic. Backed up against the wall of the Pacific Ocean, what remains of the United States of America decides to strike back by supplying unlimited guns and ammo to those of the remaining population who are willing to fight. Piece by piece the lower 48 are reconquered from the zombies and the United States then goes on to offer other countries help in their fight against the plague.

The problem with this end to the war is that the zombies have turned North America into a wasteland. In other words, there are few soldiers and there is no industry, no agriculture and no financial sector to secure the production of guns and ammo.

Brooks admits this to be the case but goes ahead with the solution anyway, drawing a parallel to World War II. According to one of the testimonials, during the zombie apocalypse, the United States were in the position of the Axis Powers (Japan, Germany, and Italy) whose resources were limited in comparison to the Allies (mainly the United Kingdom, the United States of America and the Soviet Union), here represented by the zombies. However, this parallel is not sustainable since the Axis Powers did have resources to maintain an offensive war strategy as long as the United States and the Soviet Union stayed out of the conflict. The Axis Powers ran into trouble after 1941 when new strength and new resources (combined with Italy defecting to the Allies) were added to the already ongoing conflict. These problems were exacerbated by the fact that the Allies took over or destroyed Japanese and German industrial facilities, some of which were located in areas taken by force and staffed with slave labor.

In World War Z, it would be as if the North American reconquest began at the point in time when the Red Army was knocking on the door to Berlin and the United States were about to launch their final offensive against Japan. By that time the days of the Axis Powers were numbered and everybody with their heads screwed on right knew it.

It is obvious that Brooks has a passion for history and I’m glad that he has chosen this way of expressing it because World War Z is a good book. But still, as a writer of fiction you can’t skip over certain facts. In this case that the state of war engages a society’s entire structure and that soldiers, guns and ammo are only the tip of the proverbial iceberg.

Note:
Images have been downloaded from Wikimedia Commons.

Erika Harlitz-Kern is a freelance writer, historian, and instructor at Florida International University. She has been published by The Washington Post, The Daily Beast, and The Week, among others, and has appeared on The Story of God with Morgan Freeman. She his currently working on a book about the Devil’s Bible.
Previous Post
Next Post
Loading Comments...