A commonly used phrase in political debate is “History will judge.” For example, in 2011, in a comment on ending the Iraq war, President Barack Obama stated that “History will judge the original decision to go into Iraq.” President Obama’s predecessor, President George W. Bush, also used the phrase, for example in July of 2013 when he, according to The Washington Times, stated that “history will be the judge of his record in office.” Several others, ranging from journalists and pundits to politicians and writers, use the phrase on a recurring basis.

As an historian, the phrase intrigues me. It seems as if history somehow is seen as a person with a law degree.

What does the phrase “History will judge” actually mean? And why would an historian worth his or her salt never use it?

First we need to take a closer look at what history actually is.

I define history as an academic discipline that researches the human condition through the study of written documents. History is the study of events connected to one another within the framework of human society, interpreted from the viewpoint of the individuals participating in those events as they happen.

Consequently, based on this definition of history we can determine what history is not.

History is not the same thing as time.
In other words, history does not begin when time begins. Neither does history end if or when (depending on your belief system) time ends. After the collapse of the Soviet Union and the end of the Cold War, there were voices who declared “the end of history,” as if historical research, indeed human society as we then knew it, had lost its reason for existing.

History is not the same thing as retrospect.
When looking at past events it is easy to take the outcome or result of those events and extrapolate them to a time before the events took place, as if the people involved would have known what we know. However, this is not possible when researching history. Neither is it possible to predict what events will become historical. At the same time as President Obama stated that history will judge the reasons for the Iraq war, he also said that ending the war after nine years is “a historic moment.” Unfortunately, this is something that not even the President of the United States of America can decide.

The phrase “History will judge” indicates that history is all-encompassing and omnipresent in human society. It also indicates that eventually it will be decided if actions taken and decisions made were right or wrong.

However, it is only possible to judge actions or decisions to be right or wrong if you base that judgment on a set of moral and ethical values. Such values, as we all know, change. For example, less than one hundred years ago it was normal that all women, as well as men below a certain level of income, were not allowed to vote in political elections. Less than fifty years ago it was normal for school children to be hit by their teachers. Today neither of these practices are acceptable. In certain parts of the world, I might add.

The phrase “History will judge” also indicates that sometime in the future there will be someone who makes the judgment as to what actions and decisions were right or wrong. When people say that history will judge, who do they envision making that judgment?

Based on the above definition of what history is or is not, I would argue that if history judges, those presiding will be the historians doing research at that time. The reason for this argument is that what we know about our past is based on information found, interpreted and analyzed by historians.

The only problem with this statement is that if the true judges of history are the historians, the bench will be empty when the court is in session. Any historian who takes his or her work seriously would never pass judgment on past events, processes, or individuals. In other words, an historian would never state whether something is right or wrong, but rather present the context in which an event took place and draw conclusions from there. However, this is not to say that historians accept or condone atrocities, such as, for example, The Holocaust or the Genocide of Rwanda.

Therefore, in public debate, whenever a biased statement on past events is made, that person is either not an historian, or an historian with an ulterior motive.

Next time you hear someone use the phrase “History will judge” or declare a moment to be historic, ask yourself: Who is saying it and why?

Sources:
Politico Obama: “History will judge Iraq” war
The Washington Times George W. Bush: History will be the judge; as for opinion polls, “I could care less”
Wikipedia End of history

Note:
Image of gavel and stryker downloaded from Wikimedia Commons.

Previous posts on related topics:
The Historian as Time Traveler
Historical Truth vs. Historical Validity
Historical Science in Science Fiction
Beginning of Time Is Not Beginning of History
Asimov’s Foundation and the Science of History

Hwaet.
Arguably the most famous word in English literature, hwaet is the first word in the eight-century poem Beowulf. The actual meaning of the word is up for debate, but regardless of which side you choose, the word is some kind of exclamation to indicate the initiation of the telling of a story. Hwaet is there because Beowulf was meant to be heard.

In a recent psychological study, published in Frontiers of Psychology and discussed by Rachel Smalter Hall on Book Riot, it is stated that listening to literature is the least efficient way of learning, compared to reading silently to yourself or reading out loud. According to the authors of the study this would have consequences for people living in the twenty-first century now that technological advances have changed the way we consume literature, from reading silently to listening to audiobooks.

It would appear then, that the human mind is not wired to absorb information by way of listening. What the authors seem to have overlooked is the historical perspective of the audiobook. Throughout history, literature was meant to be heard, not read.

Why did people listen to literature, rather than read it themselves?
There are several answers to this question.

It was a matter of literacy.
A population where almost 100% of adults are literate is a late phenomenon in human history. For example, during the early Middle Ages, those who were literate were mainly men and women belonging to the Church or a monastic order. Priests, monks and nuns were more likely to be able to read and write than a king or a queen. Later on, literacy spread among the social classes with the expansion of education and increased social mobility. Still, most people could not read. And those who could read did not necessarily know how to write. And among those who could both read and write, as in the case of merchants, many knew only how to write numbers and not letters. Moreover, there was a difference between sexes—men were more likely to know how to read and write than women.

An example of women who were literate. Margaret Blackburn reading from a prayer book (c. 1420). The Blackburns were a prominent merchant family in York.
Church of All Saints North Street,York, England.
Photo: EH Kern.

It was a matter of availability.
Not until the introduction of the printing press during the fifteenth century did books become available on a wider scale in Europe. Before the printing press, books were copied by hand on parchment. Those who copied books were mainly monks who spent much of their time creating beautifully crafted illuminated manuscripts.

It was a matter of cost.
Because books were written by hand and decorated to become like pieces of art, owning books was something mainly for those who had money to spend. This continued to be the case even after the breakthrough of printing in the seventeenth century. 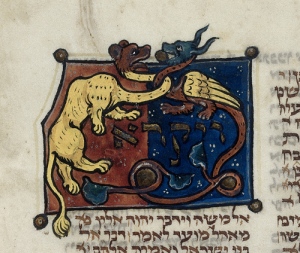 Literature continued to be read out loud well into modern times. Charles Dickens gained popularity from publishing his stories as serials that people read out loud to each other since not everybody could afford to buy a copy themselves. Charles Darwin wanted his novels read out loud to him rather than reading them himself. As late as the 1920s, professional reciters went on tour, reading literary works to the public.

In her Book Riot article, Rachel Smalter Hall questions how the results of the study were measured. Supposedly, the participants listened to a text but were quizzed on it in writing. Hall points out that this method could result in a misrepresentation of what the participants have learned since different parts of the brain are involved when listening or reading.

Listening to literature is not a phenomenon brought on by technological advances in the near-past but an activity that has engaged human beings through thousands of years. If humans are less likely to learn from listening than from reading, I’m surprised that we have made any progress.