That Sleepy Hollow‘s Ichabod Crane is a fish out of water with a close relationship to history is a well-known fact. For an historian with an interest in supernatural entertainment this makes Sleepy Hollow one of the most exciting shows on TV right now. Not only does Crane present a different view on the twenty-first century, but by being more than 200 years old he has the authority — and the audacity – to do something every historian at one point or another wishes to do. He calls out the inaccuracies of the historical tour guide. 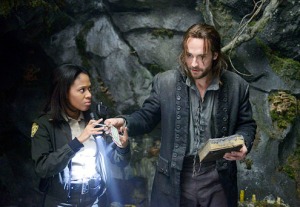 In the episode “The Midnight Ride” (Season 1 Episode 7), Abby brings Ichabod to the Sleepy Hollow Historical Museum. When they arrive, a guide takes a group of children on a tour around the museum, telling the story of Paul Revere’s infamous ride to warn the populace of approaching enemy troops.

Listening to what the tour guide is saying, Ichabod is so upset by the amount of inaccuracies that he runs after the group and in a loud voice interrupts the tour. And corrects the guide.

Believe it or not, but so far – headless horsemen, Sin Eaters, undead police officers and walking bundles of roots to the side – this is probably my favorite moment of the show. As an historian, there have been so many occasions where I wish I had the audacity of Ichabod Crane.

Being a historical tour guide is something that can be done as a volunteer, as an extracurricular activity or for some extra money. The information the guide is supposed to convey to visitors is handed to him/her by someone at the museum and most likely hasn’t changed since it was first written.

Which is why the information the tour guide gives the group includes inaccuracies.

At the same time, tour guides do a great job. They bring history to life. They bring out the excitement in historical developments. But to do so they need to simplify and embellish. As a professional historian, I write historical research articles that would put most people to sleep. For the general public to be interested in the content of those research articles, it needs to become sexy. That’s where popular history, historical fiction and tour guides come in. However, when simplifying, embellishing and making something sexy there is always a risk of going too far.

Which is why the information the tour guide gives the group includes inaccuracies.

In my opinion, Ichabod Crane is a bit of a stickler. Yes, the tour guide was wrong in calling Paul Revere a dentist and claiming that he, as the only messenger, shouted his message all around the countryside and that the message contained the word “British” as if the British already in the 1770s was different from “Americans”. However, in regards to the general outcome of the Revolutionary War, these details matter very little. But they do make a great story to tell a group of schoolchildren.

Going all Ichabod Crane on a tour guide is justifiable (although perhaps the conversation should be done in private after the tour is over) when the guide changes information that is of importance to the understanding of the overall historical process.

Calling medieval castles built in the same region over a period of 500 years a Maginot line of military defense, is reason for a conversation.

Saying that a Queen was ousted for robbing the treasury when in fact she abdicated and converted to the religion of the enemy, is also reason for a conversation.

Saying that a king was a great warrior when in fact he lost the entire empire, is yet another reason to bring out the Ichabod Crane inside of you.

Even before the pilot aired in September, I anticipated that Sleepy Hollow would be a great show. And I was correct. For each episode the show reaches new heights.

But still, my favorite moment will always be at the Sleepy Hollow Historical Museum.